Tinkerbell is a 8 year old grade pony mare that was said to be abused. Very fearful and not trusting of people. If you make too quick of movements, touch her in sensitive areas such as her stomach, butt, and legs, or crowd her space she feels the need to get defensive and strike out in order to protect herself. I took her in on July 29th 2020, with creating a connection and building trust we're slowly starting to get some progress. If you'd like to follow her journey she is mainly posted on my training page on Facebook (Spirit Creek Training Facility) or you can see the news feed in the first tab!

*July 29th-September 6th time of being in training* (New video posted above along with the first recorded videos)
Tinkerbell has made a lot of progress given her history and the behavior issues she had coming here. Noticeably she is still not as comfortable as I'd like her to be with me and around others but eventually she will become a new pony with the training she is receiving. Tinkerbell is considered dangerous and resorts to kicking/striking out when someone gets too involved in her personal space, assuming that's due to the abuse she has had in the past. This is only the beginning of her training and it may take a year or two for her to fully accept people and become comfortable around them without feeling the need to protect herself with any move that's made around her.
<
> 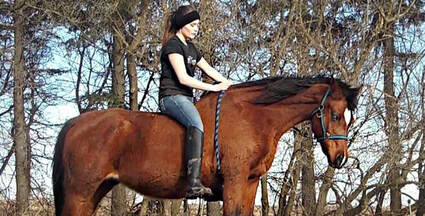 Whether it's a young horse in need of being started or a horse that comes with baggage and a history, I'm always at least working with one. Trying to be better at keeping it up on social media now that I have decent filming equipment to do so. If you'd like to follow or watch the progress of these horses you're more then welcome to do so!

I have a special place in my heart for the tougher and more challenging ones and seeing them progress motivates me to continue for others. I love seeing their personalities come out while learning to be comfortable with people and end up with successful futures because of that.